Rabbi Dean, as he is affectionately known, has been a member of the Beth Shalom community since 2007 when he led High Holy Day services as a rabbinical student. He became our full-time rabbi in 2008, following his ordination from Hebrew Union College.

After three years with us in Auckland, he returned to the United States where he served as Senior Rabbi of Temple Emanuel, a Reform synagogue in greater Phoenix, Arizona. Rabbi Dean is delighted to have made a homecoming to the Beth Shalom community some ten years later. We too, are so pleased he’s back with us in New Zealand.

Rabbi Dean is known for his warmth and laughter. Through his sermons and teachings, he makes us think and inspire us to do good in the world. Children enjoy his stories, and the delight he takes in being part of their learning. Many of us have appreciated Rabbi Dean’s comforting, soulful presence at pinnacle moments in our lives, including our children’s births, bnei mitzvah, weddings, conversions, and funerals. 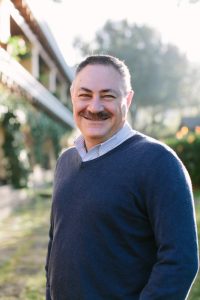 In addition to serving the Beth Shalom community, Rabbi Dean is an adjunct professor at Arizona State University. He directs The Joseph Project for the Global Future, a training ground to prepare clergy people to lead their communities through climate change and crisis.

During his rabbinate Rabbi Dean has traveled to Guatemala and lobbied the US Congress as a Global Justice Fellow with American Jewish World Service. He has studied at the Hartman Institute in Jerusalem, the Institute for Jewish Spirituality’s Clergy Leadership Program, and was part of the inaugural cohort of CLAL’s Clergy Leadership Initiative. His writings have been included in Mishkan HaSeder: A Passover Hagaddah, and the forthcoming volume Sacred Earth, both from CCAR Press. He has also served on various committees and working groups as part of the Central Conference of American Rabbis (CCAR), the American Reform Rabbinate.

Prior to rabbinical school, he worked for twelve years in the movie business. His best-known film was My Big Fat Greek Wedding. He is a graduate of Harvard College.

Rabbi Dean grew up in the beach communities of Southern California. He is married to Haim Ainsworth, who was raised in Taranaki, and together they have a teenage son, Jacob. Rabbi Dean’s favourite place in greater Auckland is Piha, where he loves to hike and enjoy the wind-swept beaches.